The history of Cancun dates back to 1967 when the Mexican government, recognizing the importance of tourism to the country’s economic future, began a detailed search to pinpoint ideal sites for tourism development. Resting on the northeast corner of the Yucatan Peninsula in the state of Quintana Roo (keen-tah-nah-ROW), Cancun was a part of the ancient Mayan civilization and is still considered the gateway to El Mundo Maya (the Mayan World). 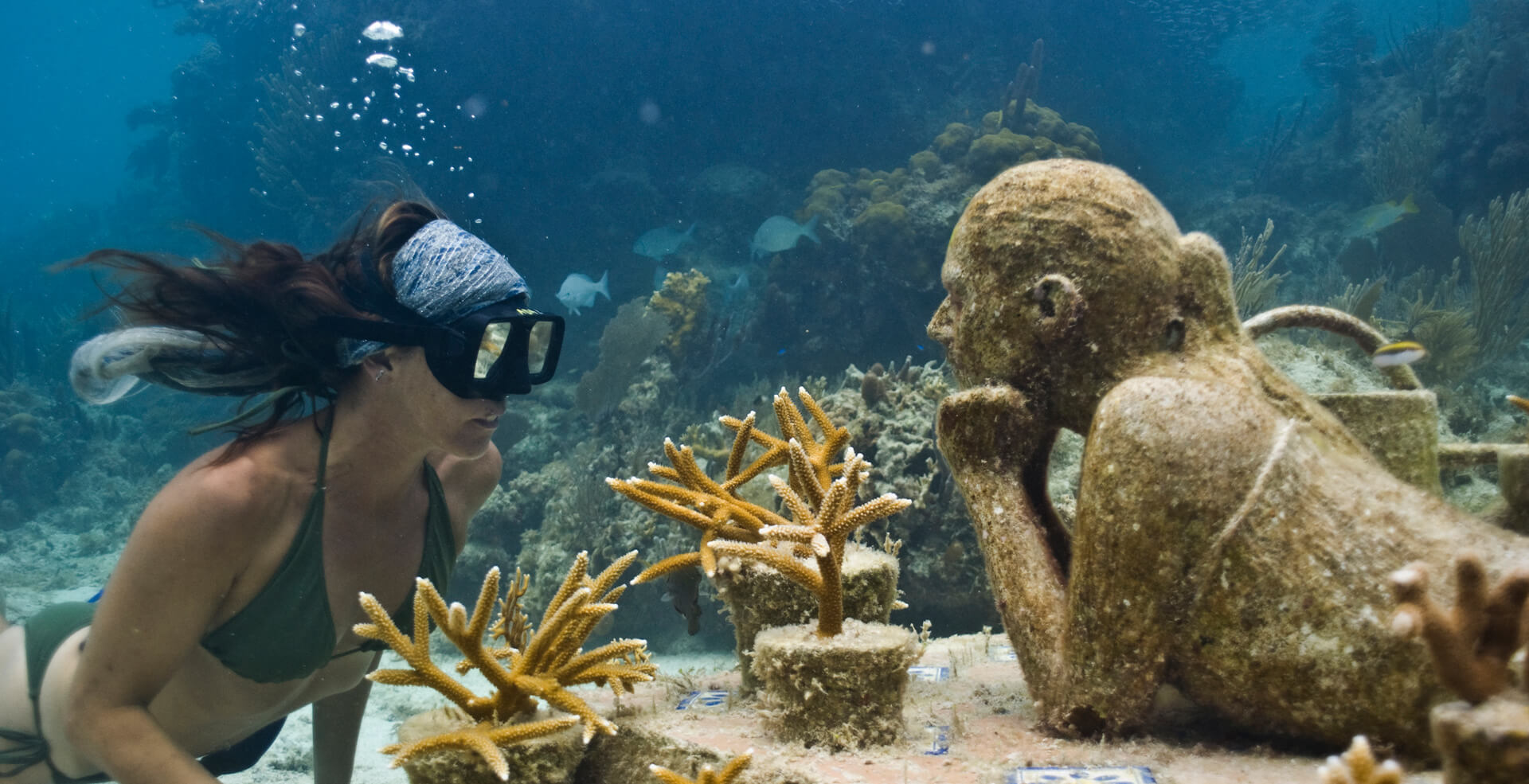 It is the place in Mexico to receive the first sunrays. This system of Mesoamerican reefs spans over twenty-two kilometers, extended in white beaches that frame it, but they are not the only thing that will make you love the island. Thanks to its great marine biodiversity, it is considered an ideal place to practice diving. The great reef banks that form live underwater gardens are home to a rich and varied marine fauna. Apart from offering spectacular, dreamy landscapes, it has a wide variety of ecotourism activities such as zip wires, rappelling, kitesurfing, windsurf, surf, swimming with dolphins, snorkeling, fishing, golf, motorcycle rides, bicycles, canoes and kayaks.
Places like Chankanaab National Park, San Gervasio Archaeological Zone or Atlantis Submarine, which will take you through the depths of the sea, are some of the things that will make you return to Cozumel. 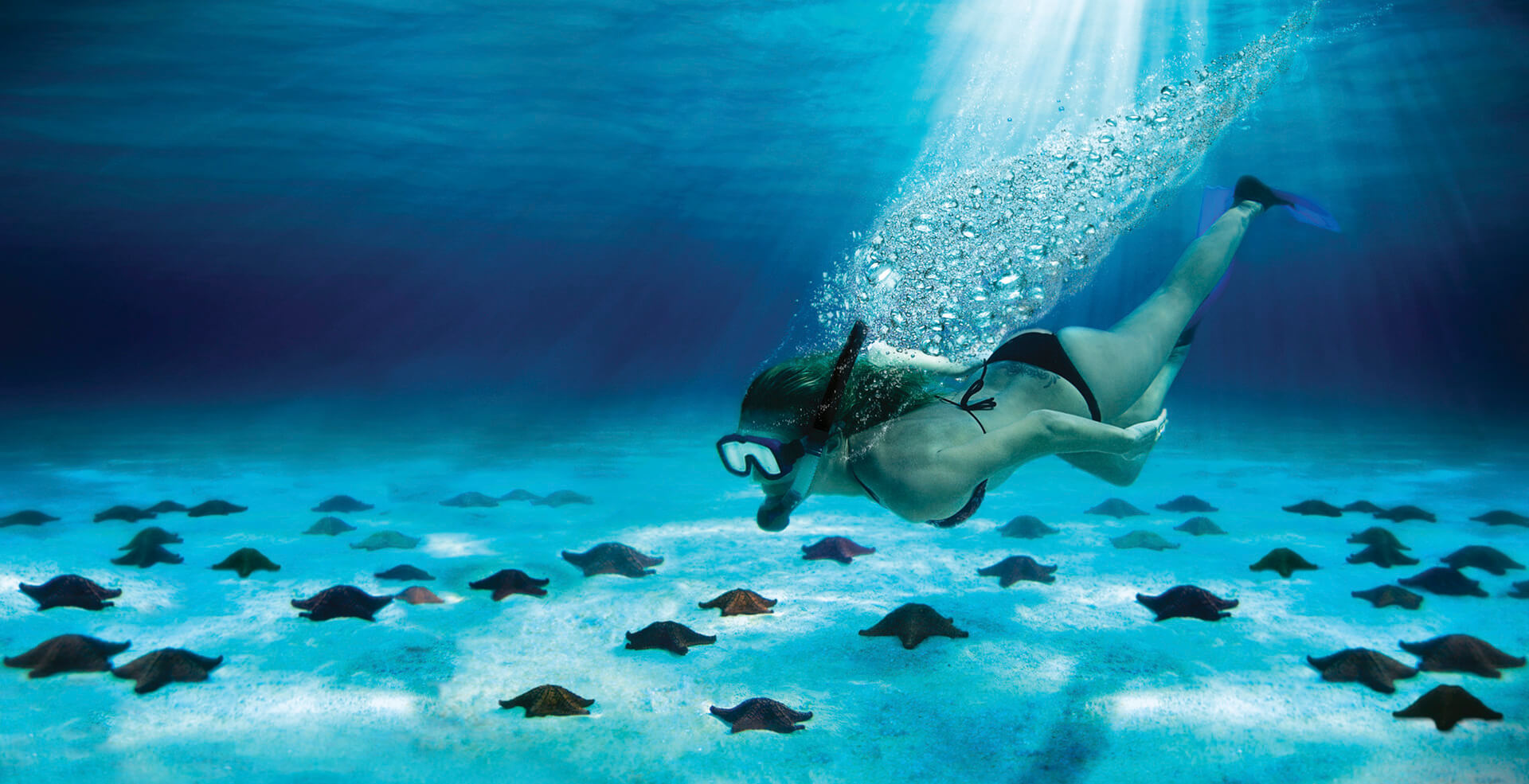 The Riviera Maya extends along the Caribbean coast of Mexico’s Yucatan Peninsula from Puerto Morelos to the Sian Ka’an Biosphere Reserve. Once home to small fishing villages, the Riviera Maya coastline has since been developed into a modern tourist corridor offering the very best of high-end luxury resorts, fine dining, nightlife, spa retreats, shopping and golf in Mexico. An ideal vacation destination, the Riviera Maya is home to some of the most stunningly beautiful beaches in all of Mexico with expansive stretches of powdery white sand lapped by the clear turquoise waters of the Caribbean Sea.

Mérida is located less than 50 km from the Gulf of Mexico in the northwestern part of the State of Yucatán, borders to the east with Quintana Roo, to the west with Campeche and to the north with the Gulf of Mexico. Yucatan has a very flat topography and is located very close to sea level.

The city is characterized by its hospitality, architectural beauty, security and for being one of the main economic centers of the Yucatan Peninsula. The peace of this city, the beauty of its streets, makes it a place of elegance and contrast with its colonial houses, its Mayan ruins and its architecture. Enter the mysticism of its archeological zones and learn about the Mayan culture, visit places like Chichen-Itza, Ek-Balam, Uxmal and Dzibichaltún. It also has an exquisite gastronomic heritage that will take over your taste.

Life in Merida and Yucatan would not be the same without the cenotes, those ancient underground rivers of clear waters that incite adventure and comfort the body by immersing ourselves in them. In its surroundings there are countless cenotes, one of the most beautiful is the one located in the archaeological site of Dzibilchaltún, open sky, and crystal clear waters. Legends, romances and courageous feats resonate on the wet walls of the cenotes hidden from sunlight, and for the tourist to access them it is necessary to have an expert guide. It is believed that the cenotes were used in ancient times to extract the Zuhuy ha, virgin water in Mayan, to prepare food for certain ceremonies, for example the Cha chaac, a ritual for the request for rain, in which it is necessary to have water pure that has not been seen by anyone.

Mérida, a place that has everything to make your visit a unique and unforgettable stay. 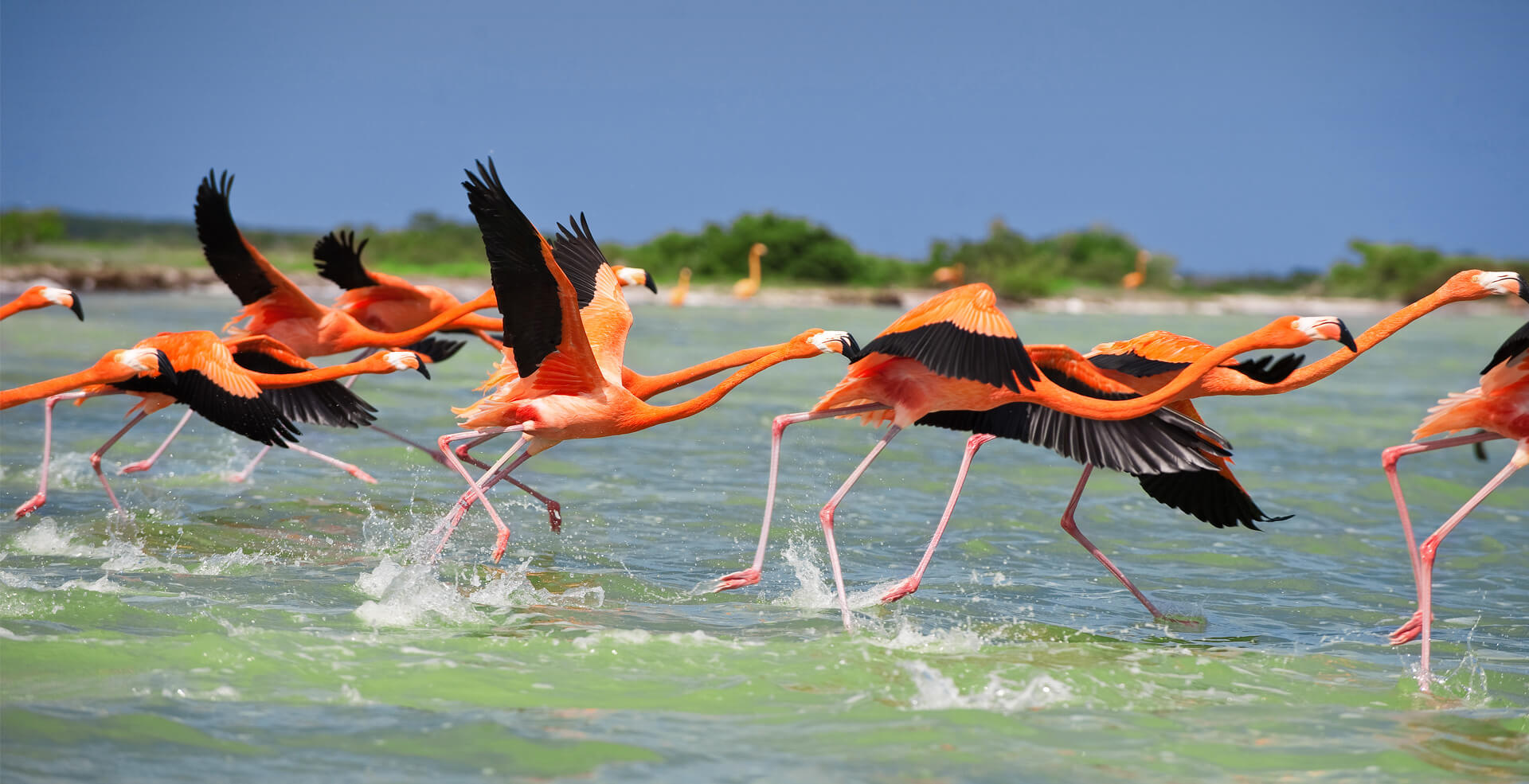 Isla Mujeres is located in the Caribbean Sea, very close to the Yucatan Peninsula, southeast of Mexico. ... In pre-Hispanic times the island was devoted to Ixchel, Mayan goddess of the Moon, love and fertility, which received offerings with feminine forms that believers deposited on their beaches.

Its territory is blissfully bathed by the waters of the Caribbean Sea, which gives it an appearance of the typical image of a paradisiacal beach: palm trees swaying to the rhythm of the wind, sun rays warming the skin, white sand between the fingers.

To get to the island you must board a ferry leaving from the Hotel Zone of Cancun or Puerto Juarez and you will be there in less than 45 minutes.

If you are looking for adventure, this island is a good place for its crystal clear waters and its beautiful coral reefs are the perfect alternative to snorkeling or diving even if you are a beginner, among other activities offered by this beautiful island. 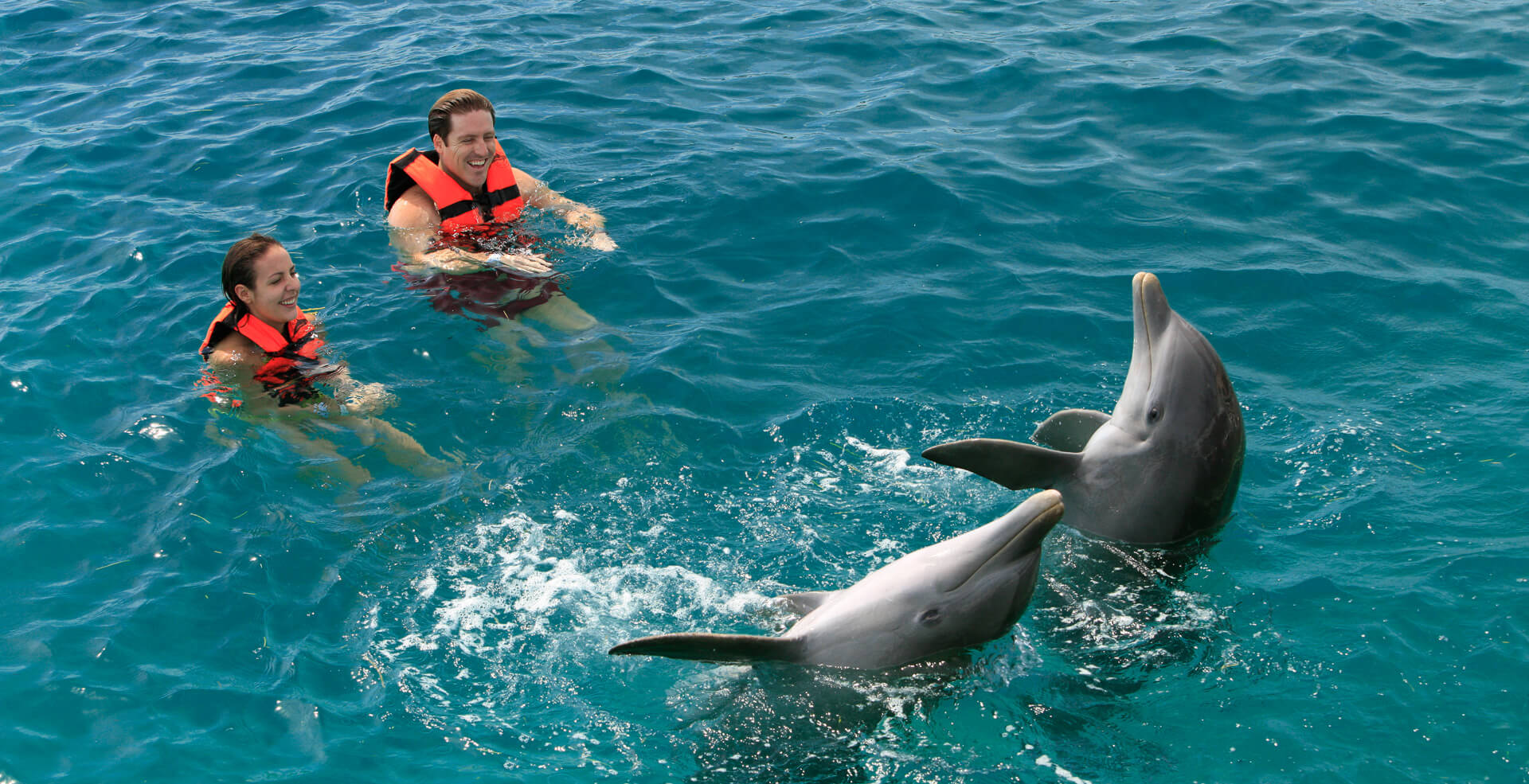 Although its name means "black hole" in the Mayan language, it is a world that appears from a distance jade green, both by the waters of the Yalahau Lagoon, which separate it from the continent, as well as by its leafy coconut palms, mangroves and creeping plants that contrast with the long beaches, the clear blue sky and the bright sun. It is located 165 km northeast of Cancun, just ten kilometers from the northern coast of the Yucatan Peninsula, just where the Gulf of Mexico joins the Caribbean Sea.

It is an area protected by international laws that combines rainforest, pristine beaches, lagoons, cenotes, and rivers; in addition to wildlife, such as deer, badger, wild boar, fox, raccoon, sea turtle, boa and turkey; as well as water birds such as heron, pelican, frigate, flamingo, cormorant and duck, among others.

Only a small part of the Island is inhabited, a fishing village with sandy streets that invite you to walk barefoot, embroidered by brightly colored wooden houses and palm roofs, and that has not changed much since its founding in 1873. There are about 2200 inhabitants and was originally formed by a few families and some foreigners who made Holbox their new home, living away from the hustle and bustle of big cities, so quiet that it seemed to have its own rhythm, its own time, its own world. 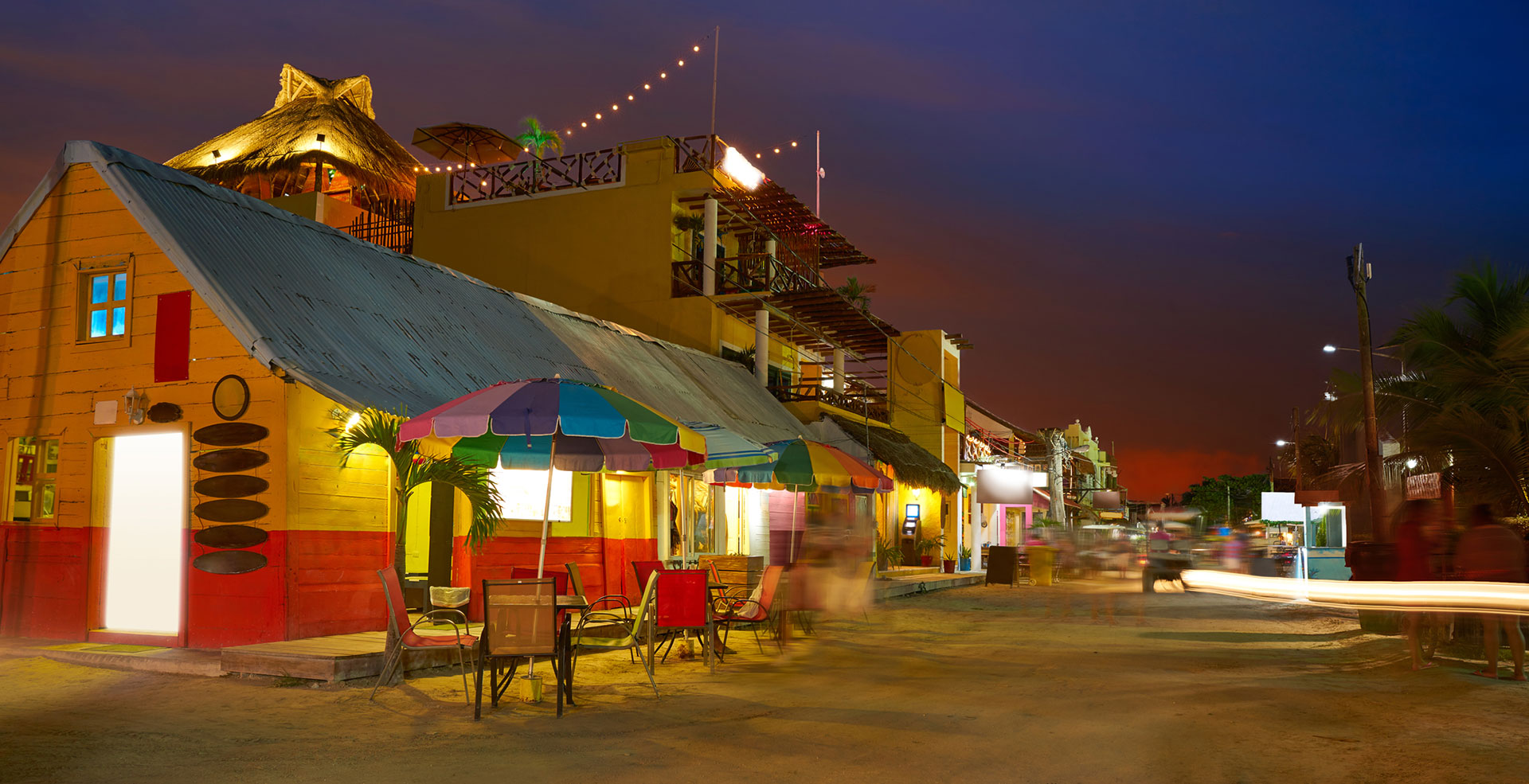 Five hours earlier than Greenwich Mean Time, (GMT), the same as U.S. central time. Daylight Savings Time begins on the first Sunday in April and ends on the last Sunday in October..

The official coin of the realm is the Mexican Peso, but American Dollars are accepted in most places.
The exchange rate with respect to the American Dollar fluctuates daily.

Valid Passport is required to travel to Mexico.